From the edge of a cargo port at the southern entrance to the Red Sea, a visitor can peer over a high wall and gain a glimpse of the future: China’s first overseas military base.

Access to the 36-hectare Chinese base is tightly controlled. From a distance, only a huddle of grey and beige buildings with Asian-style roofs is visible. But beneath the barracks is a maze of subterranean structures, connected with tunnels. In total, the base has room for up to 10,000 Chinese soldiers.

If there is a military front line in the growing global tensions between China and the United States, it is here in Djibouti, a small country of less than a million people on one of the world’s most strategically important sites.

In this hot and arid corner of the Horn of Africa, thousands of U.S. and Chinese soldiers are deployed at heavily guarded bases just a few kilometres from each other.

Djibouti dominates access to Bab el-Mandeb (the “Gate of Tears” in Arabic), a crucial choke point at the entrance to the Red Sea, only 25 kilometres wide at its narrowest point. It commands access to the Suez Canal shipping route that connects Asia, Europe and the Middle East, and it is the only place in the world where Beijing and Washington have large-scale military bases so close together.

Tensions between the two rival superpowers are already rising. Beijing has complained of spying by low-flying U.S. aircraft near the Chinese base, while Washington alleges that the Chinese have taken unauthorized photos of U.S. warships and even shined lasers into the eyes of U.S. pilots to blind them temporarily.

“It’s a cat-and-mouse game,” says Ibrahim Ahmed Djama, an official at the Djibouti Ports & Free Zones Authority, which operates a major port adjacent to the Chinese base.

In a vigorous but covert lobbying campaign, senior U.S. officials tried to persuade Djibouti to deny permission for the Chinese base – but the government refused to bow to the pressure, according to Djibouti officials in interviews with The Globe and Mail.

The Chinese base opened in mid-2017 with a flag-raising ceremony by People’s Liberation Army (PLA) soldiers. Since then, the base has become an object of fascination for military analysts. They pore over satellite photos, trying to calculate the capacity of the hangars, barracks, naval piers and an estimated 23,000 square metres of underground structures.

Troops from the Chinese base have already held live-fire combat drills in Djibouti with machine guns, heavy artillery, sniper rifles and armoured vehicles – the largest-scale exercises it has ever conducted on foreign soil.

Many countries, indeed, are jostling for room in Djibouti. This is the new Casablanca that has become a magnet for international espionage and intrigue. It contains perhaps the world’s biggest concentration of military bases in such a confined space. The French Foreign Legion, Japan, Germany, Spain and Italy are among those with a military presence in Djibouti.

The Japanese base, adjacent to the U.S. base, is the first Japanese overseas base since the Second World War. Japan has expanded the base’s size and activities in recent years. Chinese media reported in 2017 that a Japanese naval ship had covertly sent frogmen to approach a Chinese warship as it docked in Djibouti. Chinese soldiers used lights and verbal warnings to chase them away, the report said.

China is spending US$20-million annually to lease the site for its military base. Satellite images show that the Chinese base includes a tarmac for helicopters and drones, repair facilities for commercial and naval ships, storage rooms for arsenals of weapons and a nine-metre-wide security wall around it. “It’s a fortress,” says Mr. Djama as he drives past a vantage point where the Chinese base can be seen.

Just 12 km from the Chinese base is its main rival: Camp Lemonnier, opened in 2003 and now the biggest U.S. military base in Africa, with about 4,500 troops stationed in it. Beijing has complained that the Pentagon uses the base to gather intelligence on its Chinese rival.

“That’s what the Chinese are claiming – they complained several times to our Ministry of Foreign Affairs that the Americans were overflying their base with helicopters and drones,” said Aboubaker Omar Hadi, chairman of the ports and free-trade authority in Djibouti.

He agrees that the Chinese and U.S. troops are in close enough proximity to trigger an accidental conflict. “It could happen, it could happen,” he told The Globe in an interview. “But I think it can be controlled,” he said. “If they want to fight, they have plenty of places in the world to do it. Here they are too close. We put them too close to fight.” 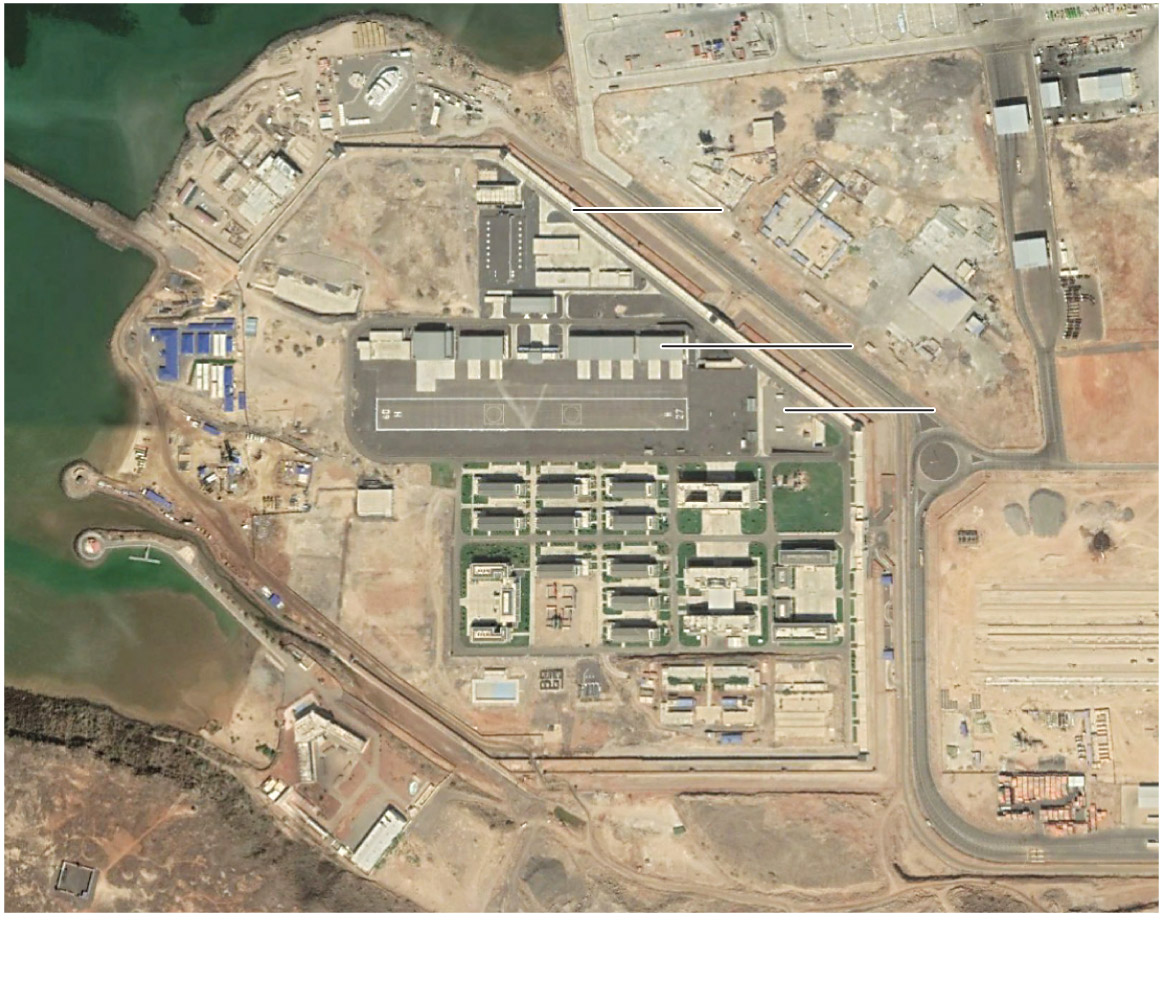 TRISH McALASTER / THE GLOBE AND MAIL

The Djibouti government has felt obliged to remind the Chinese and Americans of the need to respect their host’s rules. “The position of my government is: ‘Don’t forget, both of you are guests,’ ” Mr. Hadi said. “They understand very well what that means.”

But if the Americans are guests, they can be demanding ones. Djibouti officials tell the story of how high-level U.S. officials put intense pressure on the tiny country when they heard that Russia was seeking permission to open a military base here.

“The Americans heard rumours that the Russians are coming,” recalled one official, who didn’t want to be identified by The Globe to preserve diplomatic relations. “They came here and met our President and said, ‘Please don’t do that.’ He said, ‘Okay, I’m a friend of the USA, so I’m not allowing Russia to come.’ A few months later, the Chinese came, and again the Americans complained. And the President said, ‘Hey, we agreed on Russia. You said only Russia. You can’t tell me not to accept the Chinese.’ ”

After losing the battle to prevent the Chinese base from opening, the United States invested heavily in Camp Lemonnier, extending its lease on the site, doubling its lease payments to US$63-million annually and announcing more than US$1-billion in upgrades. The Pentagon has used the base for hundreds of drone attacks on terrorist targets in Somalia.

Washington has continued to complain vociferously about the Chinese base. President Donald Trump’s national-security adviser, John Bolton, alleges that China used “military-grade lasers” from its Djibouti base to “target and distract U.S. pilots” in 10 separate incidents. “Two of our American pilots suffered eye injuries from exposure to laser beams,” he said in a December speech.

The same alarmist tone fuels the rhetoric of other U.S. officials. General Thomas Waldhauser, head of the U.S. military command for Africa, told a U.S. Senate committee that he is worried about a possible Chinese takeover of one of Djibouti’s biggest ports, the Doraleh Container Terminal, adjacent to the Chinese base, which was nationalized by the government last year.

The U.S. general estimated that 98 per cent of supplies for U.S. military operations in Eastern Africa go through the port. “If we were denied access or had limited access, it would have a significant impact on our activities in East Africa,” he said, describing the port access as a “strategic imperative” for the United States.

Mr. Bolton said a Chinese takeover of the container terminal would shift the “balance of power in the Horn of Africa” and would endanger the Pentagon’s ability to “protect the American people” from terrorist organizations in Eastern Africa.

China and Djibouti have scoffed at the U.S. allegations. China has formally denied the laser-attack allegation, and senior Djibouti officials have complained of “misinformation” by the United States on the port issue.

“I think the American politicians are manipulated, they are given wrong information, they are far away from Africa and Djibouti,” Mr. Hadi said.

Yet he also acknowledges that the Djibouti government might allow Chinese investors to win a share of the container terminal – perhaps as much as 33 per cent, he says. (One of his aides later rushed after The Globe journalist to urge that this comment be deleted from the interview.)

Beijing has been unimpressed by the U.S. efforts to halt China’s expansion in Djibouti. “The U.S. government needs to abandon its old mentality of regarding Africa as its own sphere of interest and trying to drive out others from there,” Chinese researcher Shen Shiwei wrote in the state-owned Global Times newspaper after Mr. Bolton’s speech.

But there is little doubt that China sees its base in Djibouti as the first of many bases worldwide, under a doctrine known as “the String of Pearls” – an emerging network of Chinese ports and bases from South Asia to Africa. The strategic port of Walvis Bay, on the Atlantic coast of Namibia, is often reported to be the next Chinese naval base in Africa, although there has been no official confirmation.

“We will be gradually moving from depending on dispatching supply vessels to setting up overseas bases,” said Li Chunpang, political commissar of the Chinese military base in Djibouti, in a recent interview with Chinese state television.

China originally portrayed its base in Djibouti as merely a “logistics” base to support its peacekeepers and anti-piracy operations. But it is increasingly clear that the base is much more than that. It protects Chinese interests in the region, including the crucial sea lanes that carry half of China’s oil supplies.

“The Djibouti base enables the PLA to project force and protect Chinese citizens, supply chains and other interests in Africa and along its ‘Maritime Silk Road’ across the Indian Ocean,” wrote Canadian analyst Michael Kovrig last October in a commentary for the International Crisis Group, only a few weeks before he was arrested by Chinese police during the diplomatic dispute between Canada and China.

China, like the United States, has an unofficial purpose for its military base: to expand its geopolitical influence in a global hot spot, at the intersection of Africa and the Middle East.

And in a region where thousands of Chinese citizens are working on construction and engineering projects, China wants to demonstrate that it can protect and rescue its citizens if they are threatened with violence – as its troops did in the plot of the hugely popular 2017 Chinese action movie Wolf Warrior 2. “Set in a nameless African country that descends into chaos, it closes with the hubristic message that China’s government will protect its citizens wherever they go,” Mr. Kovrig noted.

China’s military operations in Djibouti are, in some ways, a response to the Pentagon’s expansion across Africa. Thousands of U.S. troops are stationed across the continent. Researchers have found U.S. military activity in at least 49 of the 54 African countries in recent years, including special-forces operations, military exercises and training missions.

Since the beginning of Mr. Trump’s presidency in 2017, the Pentagon has openly declared that it is entering an era of “great power competition” with China and Russia. This includes a rivalry for influence in Africa, where the Pentagon is increasingly worried about terrorism. The United States has used its Djibouti-based drones to escalate its military strikes against al-Shabaab, the Islamist militia in Somalia, and it is determined to prevent any Chinese threat to its Djibouti base.

All of this has Djibouti watching the Chinese and Americans carefully. “We are happy to have our friends here, but our intention is not to suffer from our generosity,” Djibouti’s Finance Minister Ilyas Moussa Dawaleh told The Globe in an interview.

“Are different powers conflicting in Djibouti? They should not. It’s not in our interest. And it’s not in their interest either. The two superpowers have more to gain from the stability of this region than from creating unnecessary conflict.”

World Council of Churches works towards peace between Ethiopia and Eritrea

Ethiopia: Several killed by police in Nekemte after protest over attacks...