by Martin Plaut
in Opinion 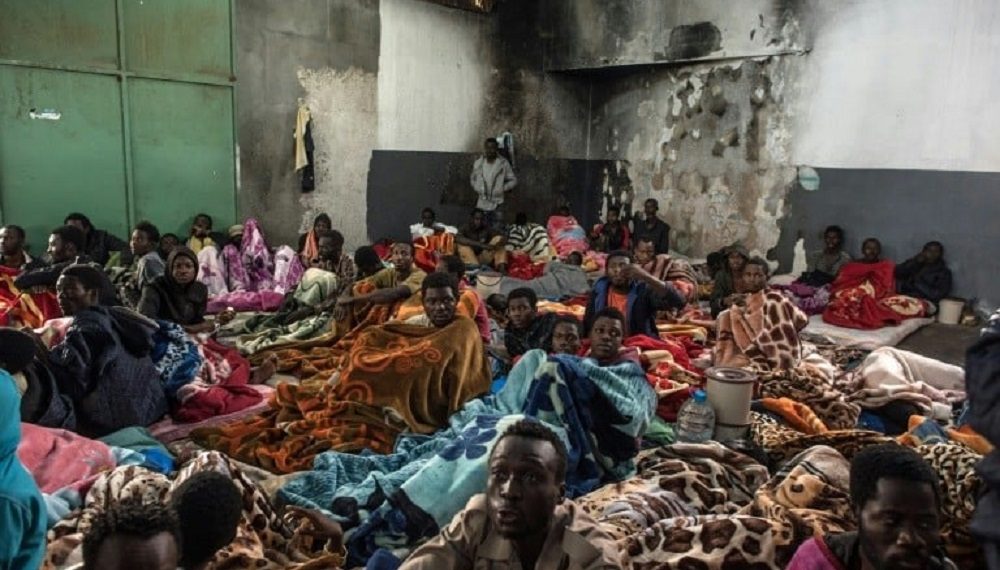 African migrants in a packed room at the Tariq Al-Matar detention centre on the outskirts of the Libyan capital Tripoli. Photo: Taha Jawashi, AFP

The images were terrible: the twisted metal and concrete were all that remained after the bombing of the Tajoura Detention Center in Libya’s capital Tripoli. People gathered outside, praying and weeping for those who had been trapped inside. It is more than two weeks since the airstrike hit the center on July 2, leaving at least 53 people dead and many more wounded.

The detention center was estimated to be holding 200 refugees and asylum seekers at the time. Some have since been released, a step welcomed by the European Union. But their statement, describing the development as “positive,” rings a little hollow. Not long afterward another 90 people attempting to leave Libya were intercepted at sea by the Libyan Coast Guard, trained and equipped by the European Union, and taken to Tajoura.

There are dozens of detention centers, spread across Libya and holding an estimate 6,000 desperate African migrants. The centers are – in reality – very much part of E.U. foreign policy. It has been clear for some time that European politicians are determined to exclude migrants; whether they are coming for economic reasons or as refugees.

The rise of populist parties has threatened the European political order with migration as the most toxic issue. But the May 2019 elections across the E.U. saw populists fail to make the ground they had hoped to (except in the U.K.). Rather, there was a surge in support for liberal and green parties.

The fall in migration has been dramatic and the E.U.’s own statistics tell the story. Back in 2015 more than a million migrants arrived. As the E.U. puts it:

What has happened is a simple matter of policy. While President Donald J. Trump has talked about building a wall on the U.S.-Mexican border, the Europeans have acted. As I pointed out over two years ago, the E.U. wall was almost complete.

This is particularly true for African migrants, who have found one route after another effectively sealed. All along the Mediterranean, a virtual “wall” has been constructed. From the Canary Islands in the West to the Sinai in the East, impenetrable obstacles have been put in their way. Little wonder that a flood has turned to a trickle!

A price has been paid for this “success.” Migrants regularly drown in the Mediterranean. Operations by rescue ships, picking up those who get into difficulties, have been blocked.

But these are not the only “bricks” in the E.U.’s “wall.” In the Sudanese capital, Khartoum, a regional operational center does all it can to turn back African migrants. The E.U.’s work in Sudan includes support for several detention centers in which the migrants have been held.

These activities have continued throughout the upheavals Sudan has been undergoing, which have seen President Omar al-Bashir removed. The E.U. is accused of having links with some of the most repressive forces inside the new administration, including Mohamed Hamdan Dagolo, better known as “Hemeti,” whose Janjaweed forces are` responsible for the atrocities in Darfur.

Niger is another location of detention facilities supported by the E.U., and for a similar purpose. Africans who make it to Niger – often after having paid their life savings to smugglers – find themselves detained and persuaded to return to their home countries.

Those who are captured in Libya, or on boats in the Mediterranean, face similar treatment. These are all part of the E.U.’s plans to halt and deter the influx of migrants seeking sanctuary on European shores.

The Italians have recently suggested that the migrants should be allowed to make the journey in the safety and comfort of chartered flights. But there is a catch: the plan is that they would not land in the first country of safety, but are instead given sanctuary across the whole of the European Union. Italy, Spain, and Greece would be exempted from further migration. Some European countries have flatly refused to do this. Hungary, for example, has done all it can to prevent anyone from crossing their borders without permission. Walls of razor wire were installed in 2015, and Prime Minister Viktor Orban has made resisting migration a central plan of his government’s policies.

The E.U. is fully aware of just how terrible the conditions in the Libyan detention centers really are. But for European politicians that is not the issue. Keeping populist threats at home at bay has a higher priority.

Martin Plaut is the author of Understanding Eritrea.

Disclaimer: The views and opinions expressed here are those of the author and do not necessarily reflect the editorial position of The Globe Post.