The New Scramble for Africa

[Note: the American bases are not shown]

The modern scramble for Africa is intensifying.

A sharp uptick in the expansion of foreign militaries in the Horn of Africa accompanied the growth of economic competition in the region in 2017. China, Turkey, and the United Arab Emirates have opened military bases throughout the area in the past two years. The region is strategically important to these states for various reasons: securing shipping routes in the Bab al Mandab Strait, proximity to the ongoing conflict in Yemen, and the desire to array forces in the region alongside rivals including the United States. 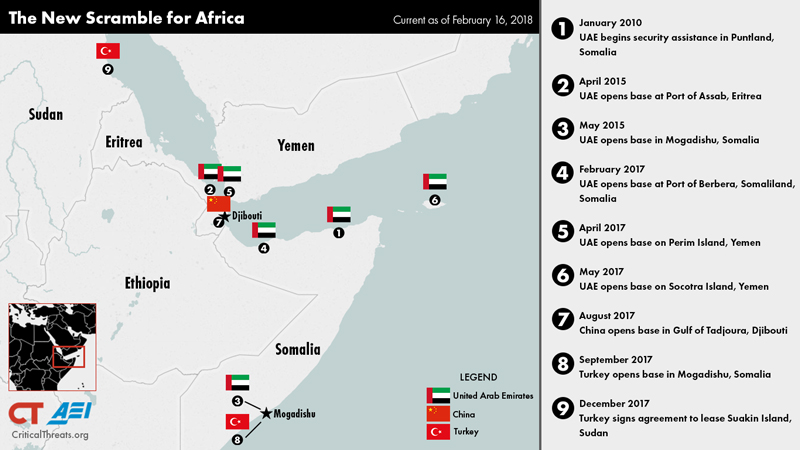 Emirati operations in Yemen relied originally on basing in Djibouti. The UAE invested heavily in Eritrea beginning in mid-2015.[3]The Emirati military now operates from the Assab base in Eritrea and smaller outposts on the Yemeni islands of Socotra and Perim. The UAE is also expanding its presence into Somaliland at the port of Berbera.[4]

The UAE opened a military training center in Mogadishuin May 2015.[10]

The UAE confirmed the presence of its military forces on the Yemeni island of Socotrain May 2017.[18]

China opened its first overseas military base in Djibouti’s Gulf of Tadjouraon August 1, 2017.[22]

Turkey opened its largest overseas military base in Mogadishuon September 30, 2017.[30]

Sudan signed an agreement on December 26, 2017 to transfer responsibility for Suakin Islandin the Red Sea to Turkey.[34]

Watch how the new scramble for Africa has developed since 2010:

The Gulf Contest for the Horn of Africa

Effects of the Qatar crisis have not been contained to the Gulf. The crisis has diplomatic and financial implications for states in the Horn of Africa, where we have observed a competition for influence among the Gulf States and Turkey. Saudi Arabia and the UAE see the Horn of Africa as a strategic opportunity to enhance their capabilities in the Gulf of Aden to support operations in Yemen. Turkey diverges from Saudi Arabia and the UAE in its Horn of Africa priorities: instead of expanding its military presence in the region, Turkey’s strategy involves a combination of heavy investments and commercial contracts, hoping to boost its economic competitiveness in the region. Qatar has largely aligned with Turkey and prioritized a humanitarian response to the drought in Somalia. Long-term, all four countries are looking to counter Iran’s intent to expand its naval capabilities in the region.

Saudi Arabia, the UAE, Bahrain, and Egypt cut formal ties with Qatar on June 5, 2017, resulting in the withdrawal of ambassadors and bans on trade and travel. Saudi Arabia also expelled Qatar’s contingent from the coalition fighting in Yemen. The conflict has bolstered relations between Qatar and Turkey, which has responded to the crisis by providing food aid and recommitting to providing Qatar with increased Turkish military presence.[1]Saudi Arabia originally presented Qatar with a list of thirteen demands, including ending diplomatic and military ties with Iran, cutting ties to all terror organizations, and shutting down Al Jazeera. The list has since been shortened to six demands, but mediation efforts by the US and Kuwait have made no progress in ending the dispute.[2]

Somalia’s strategic location and complex ties with Gulf Cooperation Council (GCC) member states placed Somalia at the center of negotiations, with both sides in the Qatar conflict persuading the nation to abandon its neutral stance.[3]

Qatar and Turkey can leverage political ties and substantial humanitarian aid commitments to pressure Somalia to maintain its neutral stance.

The Saudis are leveraging financial aid to pressure Somalia to cut ties with Qatar.

The UAE could leverage commercial contracts to influence Somalia’s stance, but it is unlikely to hold much weight as Farmajo already disapproves of the contracts with Somaliland and Puntland. The UAE is more likely to withhold support for Somali defense entities.

Broader contest for influence in the Horn

Saudi Arabia and the UAE

The two states’ presence in the Horn of Africa indicates broader shifts in their strategic goals. Saudi Arabia prioritizes countering the  Iranian-backed al Houthis in Yemen and setting conditions to declare victory and end the war. The UAE has used the collapse of the Yemeni state and the war to project its influence further into the Gulf of Aden.

Saudi Arabia envisions Djibouti as the future center of its operations in the Horn of Africa.

The UAE previously operated out of Eritrea, but shifted focus to new military projects in Somaliland.

Turkey diverges from Saudi Arabia and the UAE in its priorities. It has expanded its military presence in the region in a limited way, while focusing on a combination of heavy investments and commercial contracts to boost its economic competitiveness in the region.[37]

The buildup of GCC presence in the Horn of Africa could indicate broader anti-Iranian posturing in the region.