Last week, the High Court determined that if an agreement with a third country is not reached and approved by Attorney General Avichai Mandelblit by 12pm Sunday, the asylum seekers would be released. The State of Israel has been in talks with another third country, Uganda, but these talks are still ongoing, leaving the state no choice but to release the detainees.

As talks for a new agreement with Uganda to take in deported Africans are still ongoing, Israel left with no choice but to release remaining 207 Africans detained for refusing to leave to a third country after High Court ruling; human rights group call to recommit to agreement reached with UN refugee agency.

The Population and Immigration Authority released Sunday all 207 African asylum seekers who have been imprisoned in the Saharonim Prison in line with a High Court of Justice rulingfrom last week.

In light of the fact the talks with the (second) third country are still ongoing, and in accordance with the ruling from April 10,

The detainees who have been imprisoned there based on the ‘removal to a third country’ plan will be released from Saharonim during the day,” the authority said in a statement.

The African asylum seekers were imprisoned in Saharonim due to their refusal to leave Israel to a third country. However, because the agreement with that third country—Rwanda—collapsed, as did another agreement with the United Nations High Commissioner for Refugees, there is no legal justification to keep them in detention. 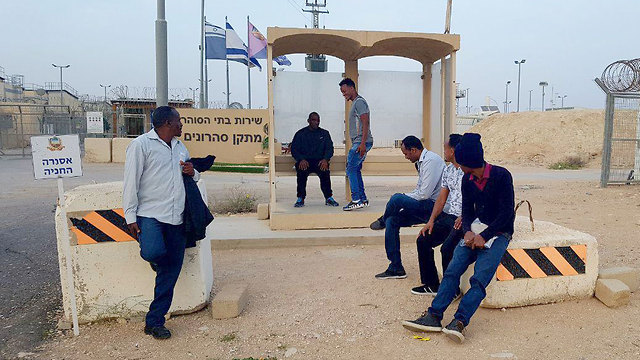 Last week, the High Court determined that if an agreement with a third country is not reached and approved by Attorney General Avichai Mandelblit by 12pm Sunday, the asylum seekers would be released.

The State of Israel has been in talks with another third country, Uganda, but these talks are still ongoing, leaving the state no choice but to release the detainees.

Upon learning that an agreement with Uganda has not yet been signed, the Stop The Expulsion movement slammed the government, saying “Another day of disgrace for the Israeli government instead of taking responsibility.”

“Today, it has been made clear beyond any doubt that forced deportation is no longer an option. Even third world countries are unwilling to be part of such an inhumane move,” Stop The Expulsion continued. “It’s embarrassing that in Israel’s 70th year we need a lesson in morals from these countries.” 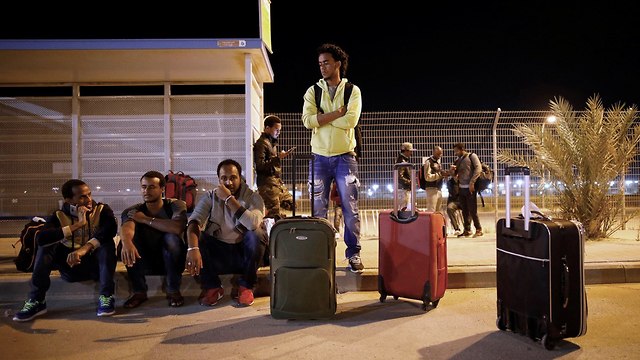 The movement called on Prime Minister Benjamin Netanyahu to recommit to an agreement reached with the UN refugee agency“and implement a real, budgeted plan of absorption and dispersion.”

Several human rights organizations—The Hotline for Refugees and Migrants, ASSAF – Aid Organization for Refugees and Asylum Seekers in Israel, Physicians For Human Rights, Worker’s Hotline, The Association for Civil Rights in Israel, and the African Refugee Development Center—called on the government in a joint statement to find “real solutions” for the African asylum seekers.

“The dangerous plan to expel refugees to Uganda and Rwanda is falling apart, and the refugees who were imprisoned despite committing no crime will be released from prison, but the government continues making cynical use of the asylum seekers and promoting anti-democratic bill proposals, while completely shirking off its obligation to rehabilitate the neighborhoods of south Tel Aviv,” the statement charged.

The human rights groups urged the Israeli government to “promote real solutions for the asylum seekers and stop its abuse of those who only seek protection. Israel must examine the asylum requests in a fair manner, integrate the refugees into Israeli society while giving them legal status and rights, and encourage their dispersal to strong municipalities, while mounting a massive rehabilitation project for south Tel Aviv.”

During last week’s High Court hearing, the state’s representative Shosh Shmueli told the judges that a special envoy dispatched by Netanyahu to the third country is continuing efforts to persuade it to take in the detained migrants.

The state representative also admitted during the discussions that Israel was in contact with the UN regarding a deal aimed at resolving the migrant crisis before Prime Minister Netanyahu accepted it, suspended it and then scrapped it all together within twenty-four hours, noting that the HCJ had not been informed.

JERUSALEM (Reuters) – Israel will release about 200 jailed African migrants in the absence of a final deal to deport them and thousands more Eritrean and Sudanese men who entered the country illegally, the Interior Ministry said on Sunday.

The government has been trying to finalise an agreement with Uganda to take in the migrants, who came into Israel on foot through the Egyptian border over the past decade.

Most of the 200 men set for release were sent to a desert prison in recent months to await deportation to Uganda.

But with negotiations continuing over a deal with Uganda, Israel’s Interior Ministry — which has faced court challenges by rights groups over the detentions — issued a statement on Sunday saying it would begin releasing the migrants.

The Israeli government says the 37,000 migrants in Israel are job seekers and that it has every right to protect its borders. The migrants and rights groups say they are seeking asylum and are fleeing war and persecution.

About 4,000 migrants have left Israel for Rwanda and Uganda since 2013 under a voluntary programme, but Prime Minister Benjamin Netanyahu has come under pressure from his right-wing voter base to expel thousands more.

On Friday Uganda acknowledged for the first time that it was in talks to take in some 500 migrants, though it said it would only accept people who left voluntarily and not by forced deportation. [L8N1RQ36A]

Israel started handing out notices to male migrants from Eritrea and Sudan in January, giving them three months to take the voluntary deal with a plane ticket and $3,500 or risk being thrown in jail until they are deported.

Israel’s Supreme Court, however, has issued temporary injunctions to give more time for petitioners to argue against the plan.

On Tuesday government representatives told the court that an envoy was in an African country finalising a deportation deal after an arrangement with Rwanda fell through.

Official documents submitted to the court said authorities have identified close to 8,000 Eritrean and Sudanese migrants it would potentially deport under compulsory expulsion.

Eritrea: Promises of More of the Same