Abraham and Binyam* had failed to escape before. The two Eritrean men, both in their early 20s and from the small town of Adi Keyh, are draft dodgers. Like hundreds of thousands of their compatriots over the past decade, they longed to cross the border into neighbouring Ethiopia to avoid a life of indefinite national service. Abraham attempted it in 2016, Binyam in February last year.

Both were arrested and imprisoned. Abraham was incarcerated for five months, during which he says he was beaten with batons and belts and fed only a few pieces of bread each day. Binyam was detained for a week, during which only one comfort break was allowed each day – out in a field, because the prison had no toilets. Both were then sent to the military, from which they absconded, returning to their hometown and a life in the shadows.

It isn’t like it is now. Now everyone is crossing. But then it was life or death,” says Abraham at a housing estate on the outskirts of the Ethiopian capital, Addis Ababa.The opening of the border with Ethiopia on 11 September, following a historic peace agreement in July, has changed everything. Suddenly, without a word from the Eritrean government, border patrols have disappeared. For the first time in decades, Eritreans can leave the country without a passport, a permit or even a promise to return.

Abraham and Binyam, along with thousands of other Eritreans, made straight for the Ethiopian border town of Zalambessa. From there they took a bus to Addis Ababa, where they arrived on September 22nd. Neither has any plan to return.

“I was euphoric,” Abraham says. “I thought all my worries would be solved overnight.”

Since September 11th at least 15,000 Eritreans have crossed into Ethiopia, according to local authorities. Many have come to trade and to visit the friends and family from whom they were separated in 1998, when war broke out. On arriving in Ethiopia, Abraham was reunited with a half-sister he had not seen in more than 20 years. The border had been almost impermeable since Ethiopia’s failure to implement a UN peace deal signed in 2000.

Most dramatic, though, has been the swell of refugees. The number registering each day has multiplied sevenfold, according to the UNHCR, the UN refugee agency. Between 12 September and 2 October nearly 10,000 arrived seeking asylum, mostly women and children hoping to reunite with family members who left illegally before the border opened.

Others, such as Even, who arrived in Addis Ababa from the Eritrean capital Asmara three weeks ago, have yet to register but plan to do so. The 25 year-old says he wants to join his family in Switzerland as soon as possible. His father and siblings left Eritrea four years ago, while he was still in prison for attempting to escape military service.

In the regional capital of Mekele, in Ethiopia’s Tigray region, buses are full of Eritreans en route to Addis Ababa. One middle-aged couple, in Ethiopia to visit a sister the wife last saw before the war, waited in a hotel for a week because tickets had sold out. The city is also crowded with Eritreans looking for jobs and rooms to rent. One Ethiopian tour guide in Mekele, who asked not to be named, said he met a group of 10 young Eritrean girls who came looking for work as waitresses and housemaids.

Some worry about the burden the influx of new arrivals is placing on the region. The same Mekele local said he found a group of five teenage Eritrean boys living in a room without enough food to eat. He took a 15-year-old called Daniel into his home after discovering the child arrived in the city on the back of a truck with only 40 nakfa (£2) in his pocket. He later paid for him to go home to Asmara.

Meanwhile the region’s refugee camps are struggling to cope with the sudden strain. Ethiopia now hosts more than 175,000 refugees from across the border.

Many of the new arrivals fear the frontier will close again. A common rumour is that it was supposed to open only for a week or so for Eritreans, though the government in Asmara has not said this. Reports of Eritrean officers hunting for defectors have heightened such fears. So too have incidents, confirmed by the Guardian, of Eritreans being denied passports and assistance at their new embassy in Addis Ababa in order to migrate further afield.

The UNHCR has said that Ethiopia remains firmly committed to the protection of refugees from Eritrea, but many – including those who arrived years before the peace agreement – remain doubtful. Even has yet to register, because he says he heard rumours he might be sent back to Eritrea if he does.

Details of the deals struck between Isaias Afwerki, Eritrea’s only president since independence from Ethiopia in 1993, and Abiy Ahmed, Ethiopia’s new prime minister, have not been made public, which has also provoked suspicion.

“We are scared our status will be revoked,” says an Eritrean teacher who arrived in Ethiopia more than a year ago. “We don’t know what deal this government has made with ours.”

Not all intend to stay, even among those who make it as far as Addis Ababa. Even’s friend plans to return to Asmara in a couple of weeks, though he says he describes his decision as unusual. The 24-year-old says that, as a Pentecostal Christian, he came to take advantage of Ethiopia’s relative religious freedom. Pentecostalism is banned in Eritrea and his father has been in prison for eight years for his beliefs. 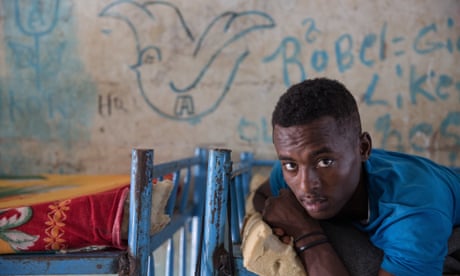 “I just came to worship freely and be blessed by the preachers,” he says. “But my mother needs me back home.”

In the absence of domestic reform inside Eritrea, peace with Ethiopia will probably mean that many more people simply leave for good. Despite signs the government intends to limit indefinite national service, and downsize the army, there has been almost nothing concrete yet.

Meanwhile, a former finance minister was reportedly arrested in September for publicly criticising the president, and more Pentecostal Christians were arrested in August.

“I never want to go back,” says Abraham, “because I’m a deserter, and if you desert your country the government won’t ever let you go.”

How Eritrean maintains control over its exiles