Not for the first time, the BBC is under attack from a dictatorship. Many authoritarian regimes have found the BBC’s committment to accurate reporting uncomfortable.

This time the attack is from Eritrea.

There are many instances of governments in the Horn of Africa attacking the BBC’s coverage.

When the Boundary Commission ruled on where the Eritrea-Ethiopia border was in 2002 the Ethiopian government first claimed that it had been awarded the village of Badme.

I was contacted by UN staff who informed me that this was not the case. Badme had been awarded to Eritrea.

This I reported. You can read the report here, or at the end of this article.

Ethiopia was furious. A minister was sent to London to have me sacked. Luckily for me the BBC stood by me and I was proved correct. Badme is indeed inside Eritrea.

All of this makes the attack by the Eritrean government on the BBC Tigrinya service so sad.

As usual, the attacks are vague generalities: there are no specific allegation that could be refuted.

Although I have long since retired from the BBC I am sure the Tigrinya service would never suggest that Eritrea is a “savage. backward country.”

If there are concrete, specific examples of this, let the Eritrean government make them public.

The BBC is always open to criticism, and would be only too willing to correct an incorrect report. But these kind of insinuations against professional journalists are nothing but reprehensible attempts to silence and intimidate.

I have every confidence that the BBC will resist attempts to censor its reporters – as it has always done in the past.

Of course, the Eritrean government would not take the trouble to attack the BBC Tigrinya service if it had not won a sizeable audience inside the country. Perhaps it is a kind of backhanded compliment! 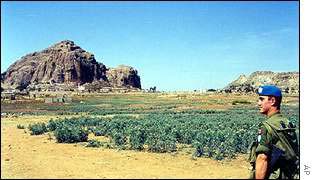 The decision on the border was delivered in The Hague on Saturday, but the outcome was obscure enough to leave both countries in a position to claim victory.At the heart of the controversy is the small town of Badme – the ownership of which sparked off one of the bloodiest wars of recent times.

Each side says it has won control of the key western border town, adding to the confusion about the ruling.

Ethiopia’s Foreign Minister, Seyoum Mesfin, said the boundary commission had “unequivocally confirmed Badme to be the sovereign territory of Ethiopia”.

Mr Seyoum said the Eritrean Government was spreading “conflicting lies” over Badme in order to “appease the Eritreans with false hope.”But Eritrea insists it has been given control of the town.

“Badme was and remains the sovereign territory of Eritrea, this has now been determined by the Ethiopia Eritrea Boundary Commission,” said Saleh Omar, the Eritrean ambassador to the Organisation of African Unity in Addis Ababa.

The BBC’s Martin Plaut, who has studied the 125-page document defining the border, says that, tucked away in the text, the legal experts make clear that they reject the Ethiopian claim and draw the border in such a way that Eritrea wins title to the town – if not the area that also bears its name.

The independent commission, based in The Hague, drew up the new border between the two former foes, details of which were published at the weekend.

None of the maps used in the ruling show the village of Badme – the same name is used to refer to the village, the plains and a district.

Martin Pratt, head of the UK-based International Boundaries Research Unit says that he cannot see decisive proof over who gets control over Badme in the ruling, but the settlement appears to lie to the west of the boundary if plotted on the Soviet topographic maps that the Boundary Commission used.”Although we may not know officially until demarcation of the boundary has been completed, I think the Soviet maps – which both parties used in their pleadings – are sufficiently accurate to say with some confidence that Badme is in Eritrea,” Mr Pratt told the UN’s Integrated Regional Information Networks news service.

The BBC’s Nita Bhalla in Addis Ababa says detailed satellite imagery is needed to determine the actual demarcation on the ground.

Experts say this is a lengthy process, and Badme residents are likely to be in a state of confusion until physical demarcation is completed next year.

Elsewhere along the border the Ethiopians have made substantial gains.

The BBC’s Alex Last in Asmara says that people clapped and cheered, while drivers blared their horns in jubilation when state television and radio announced that Badme had been given to Eritrea.

Eritrean President Isayas Afewerki said that he was “completely satisfied” with the ruling.

A statement by the governing party said Eritrea would, as agreed, abide by the verdict, which it described as a victory for both peoples.For his part, Ethiopia’s Prime Minister Meles Zenawi has said his government is satisfied with the ruling by the International Boundary Commission on its border with Eritrea.

Mr Zenawi described the ruling as a victory for Ethiopia that would put an end to the bitter and violent dispute over the boundary.

“The decision of the boundary commission has awarded Ethiopia all the contested areas it had claimed.”

The boundary was decided by a five-member panel of judges, treaty experts and international jurists.

On 6 May 1998, a group of Eritrean soldiers attempted to enter Badme.

It consists of little more than an administration building, complete with flagpole, surrounded by a handful of houses.

The Ethiopian troops holding the town challenged the Eritreans to lay down their arms. The Eritreans refused, and the ensuing firefight grew into a war that left over 70,000 dead.Eritrea, which has a population of 3.5 million compared to Ethiopia’s 65 million, agreed to end hostilities in June 2000.

A peace deal was signed six months later and set the terms for the border commission.

But relations have remained strained and the United Nations has 4,200 peacekeepers patrolling a buffer zone around the disputed areas.

Diplomats say tension is likely to remain between the two countries for some time.