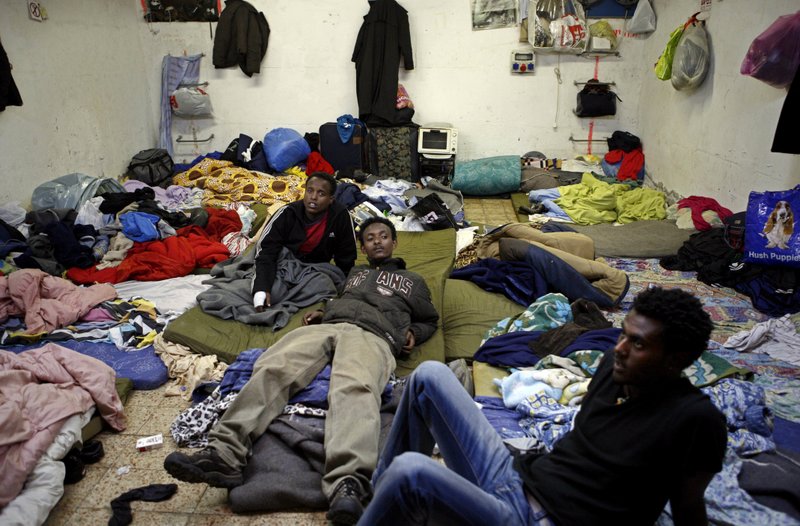 “I think it’s not going to bring a solution inside the country, because we still have thousands of prisoners in the country, we don’t have a constitution, we don’t have internal peace,” said Bluts Iyassu, who came to Tel Aviv in 2010 and is a member of United Eritreans for Justice, a group of Eritrean expatriates who are working to promote democracy in their home country.

The sudden thaw between longtime enemies Eritrea and Ethiopia is opening up a world of possibilities for the neighboring countries’ residents: new economic and diplomatic ties, telephone and transport links and the end to one of Africa’s most bitter feuds.

But the fledgling peace is raising new questions for Eritrea’s diaspora, tens of thousands who fled their government’s tight grip, rigid system of compulsory military conscription and endemic poverty.

Now they are cautiously waiting to see how the truce will shape their homeland and perhaps offer them a chance to return.

“I want to go to my country,” said Salamwit Willedo, a 29-year-old Eritrean living in Israel. “Everywhere I am a refugee. But my country is my homeland. I feel home there. So I hope, I wish, that (peace) will happen.”

Tiny Eritrea, with 5 million people, gained independence from Ethiopia in 1993 after years of rebel warfare. It has been ruled by President Isaias Afwerki since then and has become one of the world’s most reclusive nations. The state of war with Ethiopia has kept the Red Sea country in a constant state of military readiness, with a harsh, indefinite conscription system that has drawn criticism from rights groups and sent thousands fleeing in to Europe, Israel and other African nations.

The Horn of Africa arch-foes fought a bloody border war from 1998 to 2000 that killed tens of thousands and left families separated. But the antagonism faded abruptly last month when reformist Ethiopian Prime Minister Abiy Ahmed announced that Ethiopia was fully accepting a peace deal signed in 2000 that hands key disputed border areas to Eritrea.

The hostility between the nations has evaporated dramatically since. The leaders have visited each other’s countries to jubilant receptions, diplomatic and other ties have been restored, and the flagship Ethiopian Airlines resumed flights to Eritrea this week.

Ethiopia’s embrace of the peace deal was the boldest change yet by Abiy as the country moves away from years of anti-government protests demanding wider freedoms in Africa’s second-most populous nation of more than 100 million people. Now eyes are turned to Eritrea and how peace might prompt it to loosen up and drop its long defensive stance.

“Hate, discrimination and conspiracy is now over,” the 72-year-old Eritrean leader said this week to cheers and people chanting his name during his first visit to Ethiopia in 22 years.

While the diaspora is split into government supporters and critics, many Eritreans abroad are skeptical of change so long as the current government remains in power.

“I think it’s not going to bring a solution inside the country, because we still have thousands of prisoners in the country, we don’t have a constitution, we don’t have internal peace,” said Bluts Iyassu, who came to Tel Aviv in 2010 and is a member of United Eritreans for Justice, a group of Eritrean expatriates who are working to promote democracy in their home country.

Israel has become a prime destination for fleeing Eritreans and is home to about 26,000. Most live in downtrodden neighborhoods in south Tel Aviv and work in menial jobs in restaurants or hotels.

While many say their lives are better than in Eritrea, they have not received a warm welcome in Israel, which has struggled to cope with an influx of migrants from Eritrea and Sudan.

Israel sees the migrants as job-seekers who threaten the Jewish character of the state. It has detained migrants and sent them to third countries in a bid to lessen their numbers.

Rights groups say that Israel may use the reconciliation between Eritrea and Ethiopia as an excuse to encourage the migrants to leave.

For the roughly 170,000 Eritrean refugees and asylum seekers living in Ethiopia, the peace in the short term means a newfound ability to communicate by telephone with their loved ones back home.

“I can’t put my joy into words. I have already talked to my sisters in (the port city of) Massawa since the phone line was restored,” said Alemnesh Woldegiorgis, 64, an Eritrean living in Ethiopia. He said he hopes to be issued a passport to visit family he hadn’t seen for 20 years.

In Germany, where nearly 70,000 Eritreans have settled, most are refugees who came to the country over the past five years, according to Germany’s Federal Office for Migration and Refugees.

Hintsa Amine lives with other Eritreans in temporary migrant housing near Berlin’s former airport. The 22-year-old arrived in Germany a year and a half ago, and while he supports the peace deal, he said it hasn’t changed his plans because he still doesn’t feel safe in his home country.

“I want to stay here in Germany,” he said.

For Mohammed Lumumba Ibrahim, 61, who has been living in Germany for 45 years, the truce has sparked hope that he might take his children to see his homeland.

“I would love to go with the whole family. But I need to make sure myself that we have peace, that there is no war so that I can take my children and show them their fatherland,” he said.

Some diaspora members defended Eritrea’s government, saying it wasn’t to blame for all the country’s ills.

Essey Asbu, 47, who came to the United States in the 1980s as a refugee, returned to Eritrea for the 10th anniversary of independence and again about two years ago for the 25th anniversary. Eritreans mark their independence from 1991, when they captured their future capital, Asmara.

He said he doesn’t believe the current regime would have a problem letting any members of the diaspora return, unless they have committed a crime.

“I don’t know why anybody would not be very comfortable to return,” he said, adding that Eritreans who are professionals or have been educated in other countries could be the country’s greatest resource if they return.

According to the most recent data from the U.S. Census American Community Survey, there are roughly 34,000 people born in Eritrea now living in the U.S. California has the largest number, some 6,200. About 1,150 live in Minnesota, according to the survey.

Mohamed Salih Idris, 49, of Minneapolis, left in the 1970s and came to the U.S. in 1999. Idris has not tried to return to Eritrea, citing danger for himself and his family and the threat of not being allowed to leave.

He said the peace agreement is bringing some optimism, but that feeling is laced with mistrust.

“There is no trust in the current regime at all. The hope is that now with this peace agreement, there is no excuse for them to continue doing what they have been doing,” he said.

He said fear of imprisonment is very real. “That fear is making it very difficult for anyone to think about going back right now.”

Yiakl symposium UK draws over 800 delegates for day of debate,...