Since the historic accord last year, the border has closed again and little has changed. Patience among Eritreans is wearing thin. 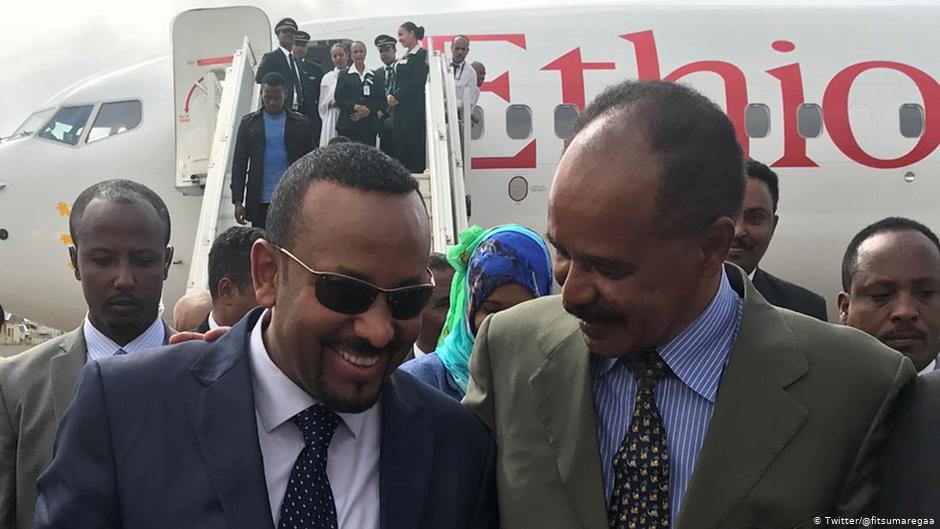 A year ago today, Ethiopia’s Prime Minister Abiy Ahmed arrived in the Eritrea capital of Asmara. Eritreans lined the streets, ecstatic to greet the leader of the country with whom they had been locked in conflict for two decades.

It was a truly landmark visit, ending years of hostility. From 1998 to 2000, Ethiopia and Eritrea had fought a border war in which some 100,000 people were killed. The resulting peace deal should have led to a renewal of relations as well as an exchange of prisoners and territory. But Ethiopia’s then Prime Minister Meles Zenawi refused to accept the loss of Badme, the village that had triggered the war, and there followed 20 years of stalemate. Troops from both countries stared across the thousand-kilometre border in a state of “no war, no peace”.

Prime Minister Abiy’s decision last year to recognise Badme as belonging to Eritrea opened the way for his visit to Asmara. His welcome could hardly have been warmer. Eritrea’s President Isaias Afwerki – renowned for hardly cracking a smile – was seen laughing and joking with his opposite number. Eritrean television showed Abiy meeting Isaias’s family and playing with his grandchildren.

Less than a week later, the Eritrean leader was in Addis Ababa where the welcome was just as warm. “This is a historic day for all of us,” President Isaias declared at a lunch with Abiy at the National Palace. “Anyone who thinks the people of Eritrea and Ethiopia are separated is considered as naïve from now on.”

In September, the relationship was then cemented by the formal signing of a peace deal in Jeddah, Saudi Arabia, witnessed by the Saudi King and UN Secretary-General Antonio Guterres. Abiy and Isaias agreed that the Ethiopia-Eritrea borders would be opened, relations normalised, and the disputes of the past put behind them. What could possibly go wrong?

For a while, all went well. Ethiopians flew into Eritrea for joyous and tearful reunions with their families. Traders crossed the border to sell their goods in Eritrean towns. Businesses on both sides of the border boomed. Mebrhit Gebrehans, a middle-aged Ethiopian woman welcomed the transformation, telling the BBC: “What we fear is war. We love peace. When the Eritreans come to this market, I welcome them with a smiling face.” Eritreans were able to get into Ethiopia easily by taxi, and thousands made the journey, with up to 500 people a day leaving for a better life.

A year on, however, the situation has been reversed. The borders are officially closed. No explanation has been given for this decision, but it appears that Eritrean authorities feared that members of the opposition were crossing over from Ethiopia where they had been stationed for many years. The main remaining sign of the peace deal are the daily Ethiopian Airlines flights that are only available to well-off Eritreans, over the age of 50, with official clearance to leave the county.

Inside Eritrea, there have been few benefits from peace beyond the ability to find everyday items brought into the country by Ethiopian traders using unofficial trade routes. The government’s policy of indefinite national service for all Eritreans remains intact. There has been no apparent progress towards officially regulating the border, a task that was meant to be tackled by joint commission from both countries. And the Eritrean parliament, which was disbanded in February 2002, has not reassembled and has had no opportunity to scrutinise or ratify the treaty signed by President Isaias.

Meanwhile, some Eritreans are worrying about their country’s independence, won at such a high price in 1993. They watched nervously last year as Abiy and Isaias pledged to share the key Eritrean port of Assab, with the French promising to help Ethiopia rebuild its navy. They have also noted that some Ethiopians started producing unofficial maps of the region that didn’t recognise the sovereignty of Eritrea.

Today then, even Eritreans who had hitherto supported the government or at least refrained from criticising it, believing this to be the best approach to safeguarding Eritrea’s sovereignty, have begun changing their stand. Members of the diaspora have launched a campaign under the slogan ‘Enough!’ This has captured popular imagination, particularly among young people who were born and raised outside the country. The activists’ creativity has resulted in an unrelenting social media campaign calling for change. Rallies and unprecedentedly large gatherings of Eritreans abroad have taken up their call.

These campaigns have been echoed inside the country, with youths writing slogans on walls protesting against indefinite conscription. Thousands of leaflets have been distributed internally, while ordinary Eritreans now openly watch and debate issues covered by opposition radio and television shows broadcast from abroad to growing audiences.

The Eritrean government has retaliated by trying to identify and quash all potential sources of encouragement for popular protest. The regime has, for example, targeted religious groups, perhaps remembering the strong protests in 2017 when the government cracked down on a Muslim school in Asmara. It has disrupted Christian prayer meetings, arrested members of “unregistered” churches, and even detained outspoken priests and monks from the “registered” Orthodox church for supporting the Patriarch of the Orthodox church, who has been under house arrest since 2005. The government has also closed 33 hospitals, clinics and health stations run by the Catholic Church of Eritrea in apparent retaliation for pastoral remarks calling for a peace dividend for the people and the opening up of democratic space.

While Eritreans are growing restless, Ethiopians have their own problems to attend to. The northern region of Tigray has repeatedly refused to allow heavy artillery to be moved away from the border, fearing an Eritrean attack. Meanwhile, more than two million Ethiopians have been displaced by ethnic conflict and there was recently a largely unexplained apparent coup attempt in the Amhara region, with the simultaneous killing of the army chief of staff in Addis Ababa.

A year on, the euphoria of the Eritrea-Ethiopia peace deal has evaporated. A sullen, tense cloud now hangs over relations between Asmara and Addis Ababa, with both nations watching developments along the border with concern.

Moving on from Ethiopia’s torturous past