This is a photograph of a British camp inside ‘Abyssinia’ from the expedition to free certain captives being held by Emperor Tewodros II.

The background to this photograph and the expedition was the capture of a missionary – Henry Stern – who had inadvertently insulted the emperor by suggesting he was of humble birth.

The British consul, Charles Cameron, interceded on Stern’s behalf and was promptly arrested and put in chains. Others were arrested, including an Assyrian, Hormudz Rassam, who had been sent to try to free the captives.

That was enough. Britain despatched an entire army, under Sir Robert Napier to ensure their freedom and the punishment of the emperor.

They landed on the Eritrean close, South of Massawa. The force consisted of 13,000 British and Indian soldiers, 26,000 camp followers and over 40,000 animals, including the elephants. The force set sail from Bombay in upwards of 280 steam and sailing ships.

The story of the expedition can be read here.

In the end the emperor’s fortress at Magdala was captured, Thedros committed suicide and the captives were freed.

The British – their task accomplished – left, taking with them a vast hoard of treasure, including ancient manuscripts.

The Imperial War Museum in London has some other photographs from the expedition, including this one below. 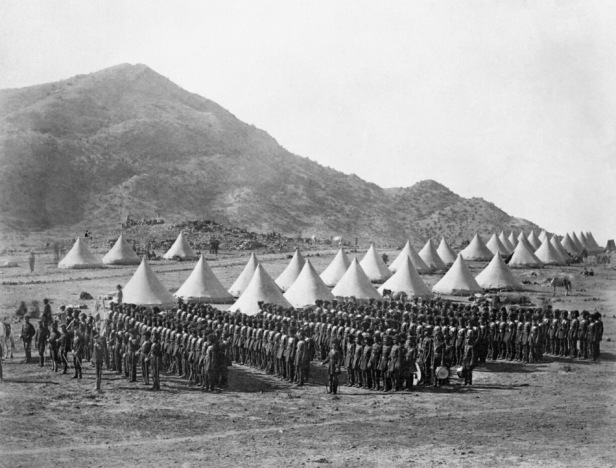 The European were not the only captives of the Emperor Tewodros.

The family of Hakim Warqenah, then a child of three and later known as Charles Martin, were also held captive there. They fled when Napier’s army attacked.
Warqenah’s nanny dropped him as they ran. He was picked up on the battle field by a British officer in the Indian army, taken to India, educated there, became a medical doctor and later returned to Ethiopia after the battle of Adowa.
He became Menelik’s personal physician and was Ethiopia’s ambassador to the Court of St. James during the “Abyssinian Crisis.” You can read about his remarkable life in Peter Garretson‘s splendid biography of him, A Victorian Gentleman and Ethiopian Nationalist.

What direction for Ethiopia – ethnicity or nationalism?